Guidelines for a more meaningful life

All humanity is one family.
Women and men are equal.
All prejudice—racial, religious, national, or economic—is destructive and must be overcome.
We must investigate truth for ourselves, without preconceptions.
Science and religion are in harmony.
Our economic problems are linked to spiritual problems.
The family and its unity are very important.
There is one God.
All major religions come from God.
World peace is the crying need of our time.

5. Buds pay for Bud’s lunch on his birthday.

6. Buds pay for Bud’s lunch on any graduation.

7. Buds are always mindful of the meaning of life.

8. Buds go for chicken wings at the slightest excuse.

11. A Bud rescues and transports a Bud when his car breaks down, no questions asked.

The Cafe of Life Chiropractic Studio

1. THE MAJOR PREMISE. A Universal Intelligence is in all matter and continually gives to it all its properties and actions, thus maintaining it in existence.2. THE CHIROPRACTIC MEANING OF LIFE. The expression of this intelligence through matter is the Chiropractic meaning of life.3. THE UNION OF INTELLIGENCE AND MATTER. Life is necessarily the union of intelligence and matter.4. THE TRIUNE OF LIFE. Life is a triune having three necessary united factors, namely Intelligence, Force, and Matter.5. THE PERFECTION OF THE TRIUNE. In order to have 100% Life, there must be 100% Intelligence, 100% Force, 100% Matter.

6. THE PRINCIPLE OF TIME. There is no process that does not require time.

7. THE AMOUNT OF INTELLIGENCE IN MATTER. The amount of intelligence for any given amount of matter is 100%, and is always proportional to its requirements.

8. THE FUNCTION OF INTELLIGENCE. The function of intelligence is to express force.

10. THE FUNCTION OF FORCE. The function of force is to unite intelligence and matter.

11. THE CHARACTER OF UNIVERSAL FORCES. The forces of Universal Intelligence are manifested by physical laws; are unswerving and unadapted, and have no solicitude for the structures in which they work.

12. INTERFERENCE WITH THE TRANSMISSION OF UNIVERSAL FORCES. There can be interference with transmission of universal forces.

13. THE FUNCTION OF MATTER. The function of matter is to express force.

14. UNIVERSAL LIFE. Force is manifested by motion in matter; all matter has motion, therefore there is universal life in all matter.

15. NO MOTION WITHOUT THE EFFORT OF FORCE. Matter can have no motion without the application of force by intelligence.

17. CAUSE AND EFFECT. Every effect has a cause and every cause has effects.

18. EVIDENCE OF LIFE. The signs of life are evidence of the intelligence of life.

19. ORGANIC MATTER. The material of the body of a “living thing” is organized matter.

22. THE AMOUNT OF INNATE INTELLIGENCE. There is 100% of Innate Intelligence in every “living thing,” the requisite amount, proportional to its organization.

23. THE FUNCTION OF INNATE INTELLIGENCE. The function of Innate Intelligence is to adapt universal forces and matter for use in the body, so that all parts of the body will have coordinated action for mutual benefit.

24. THE LIMITS OF ADAPTATION. Innate Intelligence adapts forces and matter for the body as long as it can do so without breaking a

universal law, or Innate Intelligence is limited by the limitations of matter.

25. THE CHARACTER OF INNATE FORCES. The forces of Innate Intelligence never injure or destroy the structures in which they work.

26. COMPARISON OF UNIVERSAL AND INNATE FORCES. In order to carry on the universal cycle of life, Universal forces are destructive, and Innate forces constructive, as regards structural matter.

28. THE CONDUCTORS OF INNATE FORCES. The forces of Innate Intelligence operate through or over the nervous system in animal bodies.

30. THE CAUSE OF DIS-EASE. Interference with the transmission of Innate forces causes incoordination or dis-ease.

31. SUBLUXATIONS. Interference with the transmission in the body is always directly or indirectly due to subluxations in the spinal column.

32. THE PRINCIPLE OF COORDINATION. Coordination is the principle of harmonious action of all the parts of an organism, in fulfilling their offices and purposes.

2. The origin of suffering is attachment.

3. The cessation of suffering is attainable.

4. There is a path to the cessation of suffering.

The Eightfold Path to Enlightenment 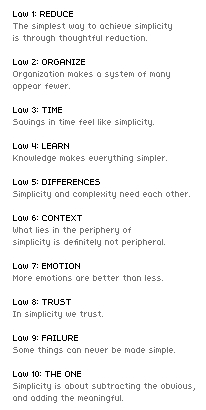 1. A complex system of many functions can be simplified by carefully grouping related functions.

2. The positive emotional response derived from a simplicity experience has less to do with utility, and more to do with saving time.

3. When the richness of an experience is increased in a manner that facilitates the perception of the overall intent, by all means don’t skimp. Add more!

4. The more you know about something beforehand, the simpler it will ultimately be perceived.

5. A material’s failure to comply to a specific application provides indication that its more natural usage lies elsewhere.

6. In order to “feel,” you gotta have noise. Too much noise, and all you’ve got is noise.

7. The more care, attention, and effort applied to that which is less, the more it shall be perceived as more than it really is.

8. Recognize not only the absolute laws of the physical universe as important constraints, but also the artificial laws as of equal importance when striving for simplicity.

10. Less breeds less; more breeds more. Equilibrium is found at many points between less and more, but never nearest the extrema.

11. Simplicity is about subtracting the obvious, while adding the meaningful.

12. A pure and resonant experience is only as simple as the greater context where it is appreciated.

13. Electronic devices cannot achieve the ultimate level of simplicity unless they are not only untethered, but have (at least) the appearance of being unpowered.

from the Northern Ireland Association for Mental Health

An insatiably curious approach to life and an unrelenting quest for continuous learning.

A commitment to test knowledge through experience, persistence, and a willingness to learn from mistakes.

The continual refinement of the senses, especially sight, as the means to enliven experience.

A willingness to embrace ambiguity, paradox, and uncertainty.

The development of the balance between science and art; ‘whole brain’ thinking.

A recognition of and appreciation for the interconnectedness of things and phenomena.

from The Five Love Languages by Gary Chapman

from Made to Stick by Chip and Dan Heath

1. Simplicity (any idea over one is too many)

2. Unexpectedness (a surprise grabs our attention)

3. Concreteness (the more dimensions of details the more hooks our minds use to create a memory)

4. Credibility (even untrue stories don’t stick unless there’s a hint of truth, such as beware of what’s too good to be true in the urban legend that opens the book)

5. Incite Emotions in Listeners (we remember emotional experiences much more than anything else; we care more about individuals than groups; and we care about things that reflect our identities)

6. Combine Messages in Stories (information is more memorable and meaningful in a story form . . . like the urban legend that opens the book)

All You Need Is Love Blowin’ In the Wind Bridge Over Troubled Water Cabaret Cat’s In the Cradle Circle Circle of Life Father and Son Here Comes the Sun Imagine Impossible Dream I Wanna Learn a Love Song King of the Road Let There Be Peace On Earth Life’s A Dance Like A Rolling Stone (Billy Stall) Like A Rolling Stone (Bob Dylan) Mr. Tambourine Man My Way Over the Rainbow Peaceful Easy Feelin’ Peace Train People Who Need People Redemption Song Revolution Sound of Music Sunrise, Sunset Teach Your Children That’s What Friends Are For The Chain of Love The Walk Tomorrow What A Wonderful World What the World Needs Now Is Love

Iroquois Thanksgiving Address – The People, The Earth Mother, The Waters, The Fish, The Plants, The Food Plants, The Medicine Herbs, The Animals, The Trees, The Birds, The Four Winds, The Thunderers, The Sun, Grandmother Moon, The Stars, The Enlightened Teachers, The Creator

A critical mass (consciousness of coincidences)

The longer now (connection to the past; material survival to spiritual awakening; new world view)

A matter of energy (energy can flow between all matter; the physical world is a vast system of energy)

The message of the mystics (euphoric connection with the universe; drawing energy from the universe)

Clearing the past (transcending our control dramas; waking up to who we really are)

The interpersonal ethic (achieving the Higher Person by synergizing and sharing energy; bringing out the best in everyone)

1. The Coming of the Ship

Secrets From the Delphi Cafe

by Scott Friedman and Bob Rich

The Code to Happiness

Living in the moment

Opportunities (rather than problems). Always act from your…

Easy to resolve or put into effect so as to build momentum for ongoing initiatives.

from The 7 Stages of Marriage by Rita M. DeMaria and Sari Harrar

The fruit of silence is prayer.

The fruit of prayer is faith.

The fruit of faith is love.

The fruit of love is service.

The fruit of service is peace.

from The Seven Spiritual Laws of Success: A Practical Guide to the Fulfillment of Your Dreams by Deepak Chopra

When you have an inspired thought, you have to act on it.

Decide what you want, focus on it, you will attract it.

Incurable means curable from within.

Maintain an attitude of gratitude.

The last frontier is the mind.

What you resist, persists.

Thoughts become things; when you visualize, you materialize.

The Book of Virtues by William J. Bennett

What Do You Stand For?

The life of inner peace, being harmonious and without stress, is the easiest type of existence.

Stress happens when your mind resists what is.

The only problem in your life is your mind’s resistance to life as it unfolds.

The greatest weapon against stress is our ability to choose one thought over another.